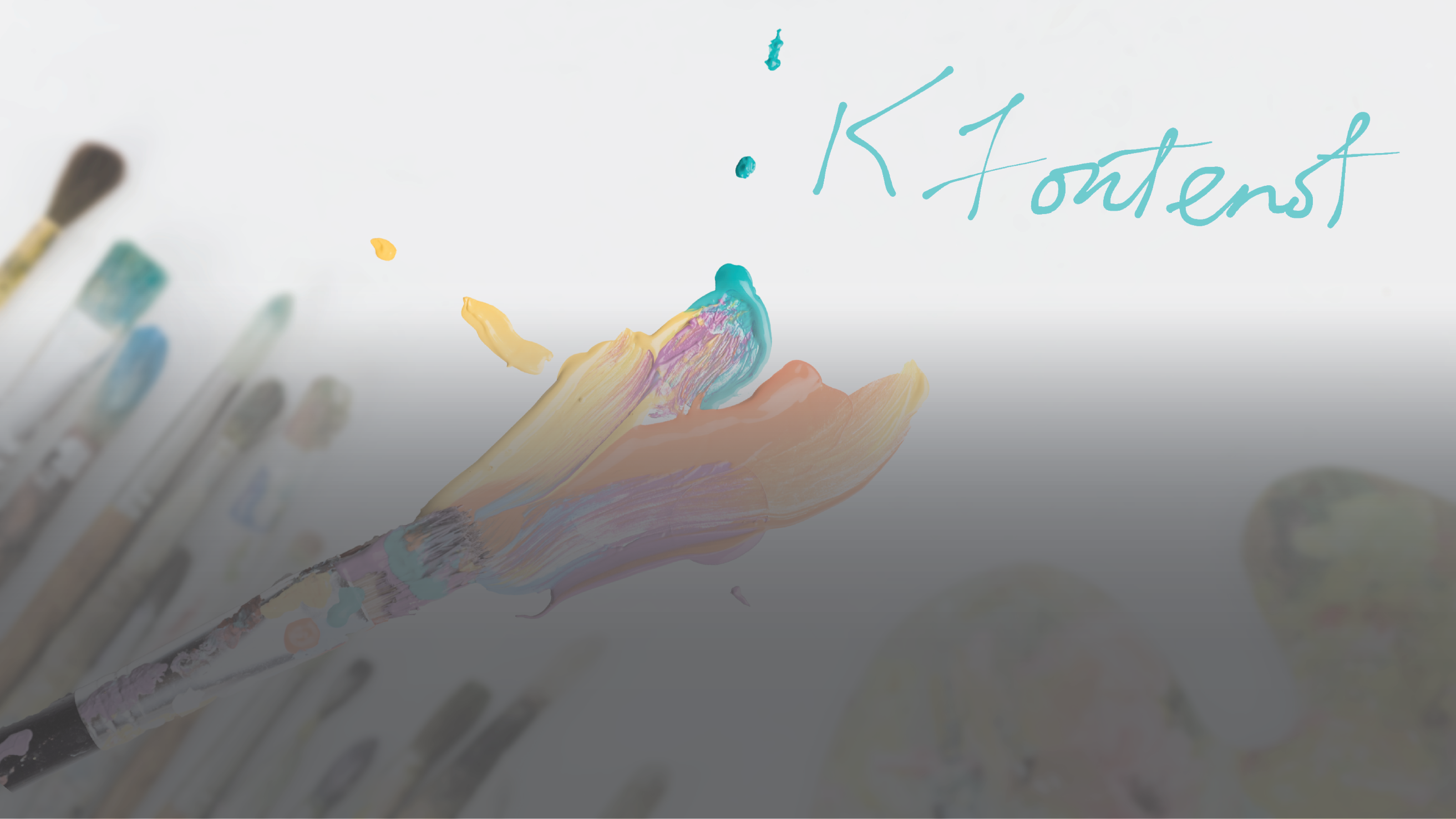 Scroll down to continue this adventure

Karen ‘Kay’ Fontenot is a Lake Charles, Louisiana native who  attended McNeese and moved to Houston in 1991. She worked with Johnson & Wurzer P.C. for eight years until she transferred to Cabot Oil and Gas.  There, she received numerous promotions that led to a career as a Geoscience Technician.  She found her passion in 2010, when she began oil painting under the tutelage of Houston artist Candy Tangney.  She says that working with her classmates and Tangney helped her cultivate her own style which focuses on proportions and a very liberal use of color.

Some of my work

Here are some of my most recent pieces. Art that is for sale can be found on my Etsy store. 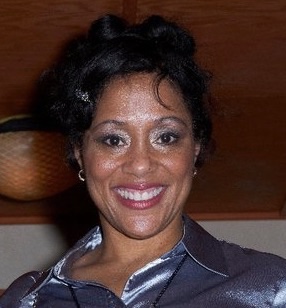 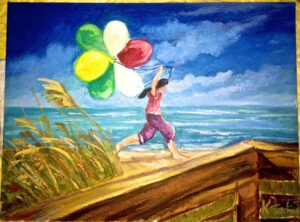 ‘Frankie at Hobe Sound’ is a happy and fun work that captures the spirit of a family friend. 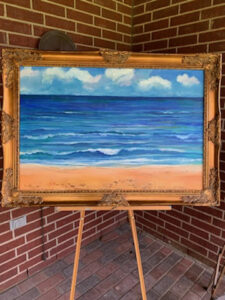 The ocean is one of my favorite places on earth to be.  I imagine that the footprints along the shore are mine along with friends. Seascapes also provide a great exercise in the many shades of blue and green. 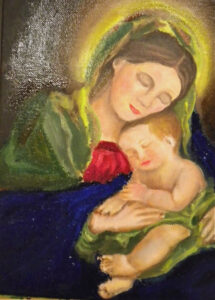 Sassoferrato’s “Madonna and Child” is one of the most beautiful images I’d seen in a long time.  Despite my teacher’s advising the high degree of difficulty, I insisted on attempting a rendering.  After a long time and too many “start-overs” to mention, this is the result. 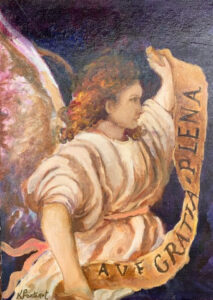 This is my rendering of The Gabriel Panel of Titian’s polyptych of The Resurrection. 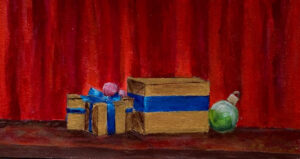 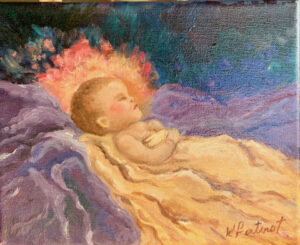 My rendering of Paul Mooney’s “The Divine Infant” speaks not only to my favorite Subject, but to my love of babies also. 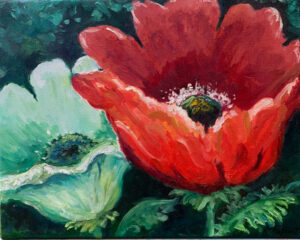 “Poppies” is one of my earliest pieces.  A favorite, it was my first exercise in shading technique. 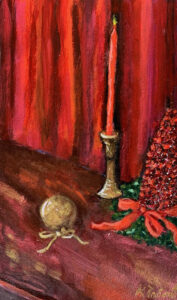 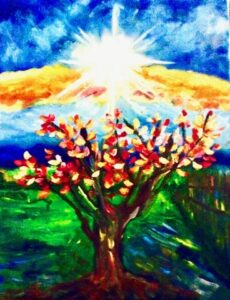 “The Tree of Life” stands in the Garden under radiant heavenly Light in this very special piece. 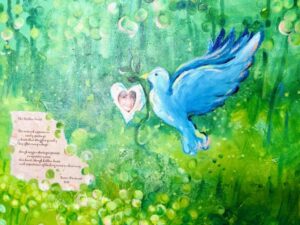 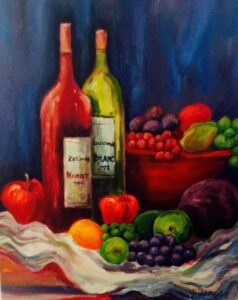 This still life is one that took time and required a number of fixes and start-overs along the way; but was well worth the effort! 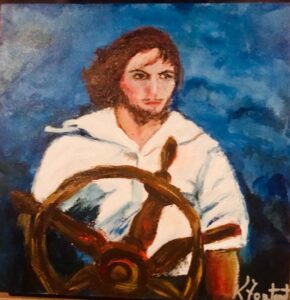 I call this one “Sea Master”.  I worked on it during a period of uncertainty in 2018 as a reminder that I am not in charge. 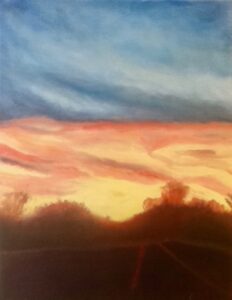 I painted “Arizona Sunset” from a photo a cousin of mine captured on a drive home one evening. 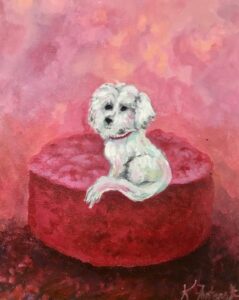 “Sophie” is a depiction of a beloved family pet! 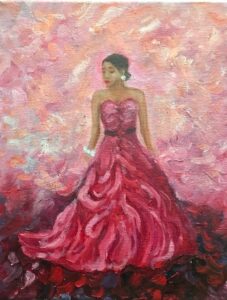 One of my earliest pieces, I titled this one “self portrait”. 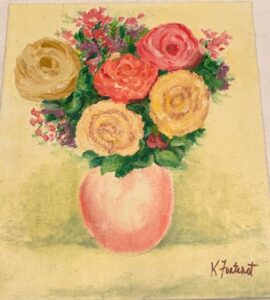 Florals have been the most challenging subjects for me over the years.  It is in the last year that I’ve become very comfortable painting them. 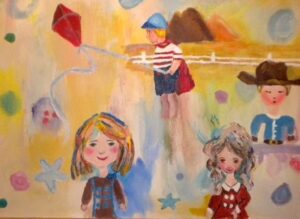 “The Grandkids” is the only piece of a whimsical sort to date, yet it captures well the characters of four unique children. 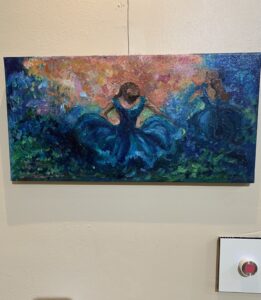 ‘The Dancers’ is one of my favorite pieces!  It has the happy distinction of being one of the first pieces of mine to show in gallery!

‘Family Reunion’ is most recently completed.  It is a stunning piece depicting a family gathering in a serene and desirable location. Logging more than 150 hours to complete, this heavy oil on canvas is my favorite work to date!

This piece was inspired when I read in Isaiah 61 that I have not only a garment of salvation but also a ‘robe of righteousness’!  A royal robe seemed most fitting. 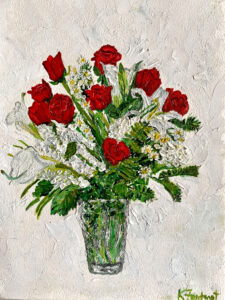 This stunning work is completed in early May 2021 at the request of a mother as a rendering of flowers she received from her son for Valentine’s Day.  Her desire for a white background presented opportunity for special effort and effect to showcase white against white. The result is quite lovely!  I call this piece ‘Flowers for Valentine’s’. 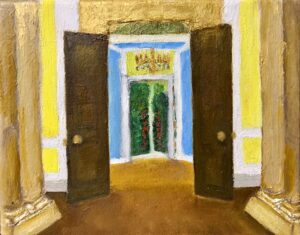 This ‘Great Hall’ was inspired by a photograph I saw but, upon seeing it, my nephew exclaimed that it looks like the girl with the royal robe’s house! I have to agree. It makes a nice accompanying piece.  She has a lovely house and yard! 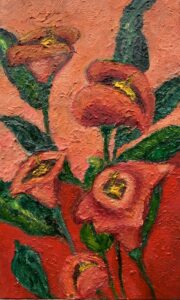 ‘Lily Red’ is a striking oil on canvas with multiple layers of rich red, coral and green hues! It is a piece that took a while to complete and was fun to do.  It is an eye catcher for sure and is one of my favorites! 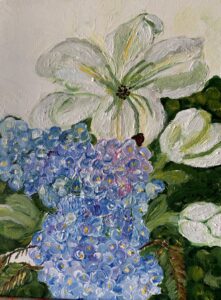 This floral is my rendering of a portion of a special arrangement given to me after my first Gallery Talk!  The piece does not give proper justice to the very beautiful, large arrangement; but it is a special reminder to accompany the photos that I took   I call it ‘Good Job’!

‘Jade in Winter’ is a delightful portrait of Jade, a high fan of winter, who is excited for the first opportunity of the season to wear her favorite yellow sweater and matching hat! 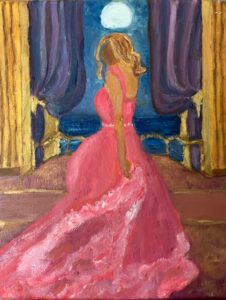 ‘On The Town’ is a recently completed oil on 8×10 canvas that evokes memories of grand scale black-tie events and occasions that are not soon forgotten.

‘Cleo’ is an exotic natural beauty with a good measure of mystique!  Eyes filled with intrigue, she’s a stunner and a conversation-starting piece.

“Tree Planted By the River” is a dramatic oil with gold leaf on wrap canvas.  A strong tree with deep roots, this piece is a reference to the Blessed man in Psalm 1. 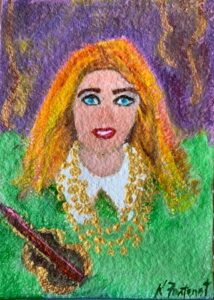 “Albertine” is first in the Mardi Gras lineup!  She is thrilled that school is out for the day as she heads for the parade.  ‘Bertie’ is a sunburst of energy! 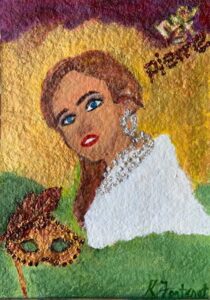 “Mardi Gras” premiered early in 2020 as a fun nod to the festive south Louisiana season of parades and pageantry!  Each piece features a girl enjoying the festivities.  Here is “Brittany”, our glamour girl!

‘Sunset’ is one piece in a category of a ‘value series’ of original works painted on 140 lb cold pressed cotton canvas sheets that require backing before framing.  In this piece, I’ve included the mat.  SOLD! 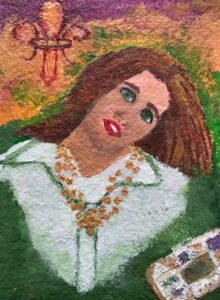 “Celia”follows “Albertine” and “Brittany” in the Mardi Gras lineup.  Celia is artistic and care free! 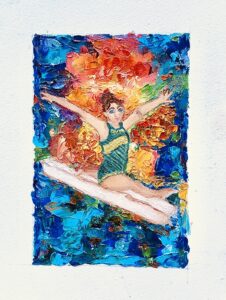 ‘Young Gymnast’ is another in the value series. Striking and cute as a button, this piece is framed within 6×9 inches of the 9×12 inch cotton canvas; providing built-in mat making for easier framing options.

I would love to hear from you!